Galaxy S7 Manual User Guide has specially to guide you the functions and features of your Samsung Galaxy S7. You can download or read here. In this document are contains instructions and explanations on everything from setting up the device for the first time for users who still didn’t understand about basic function of the phone. 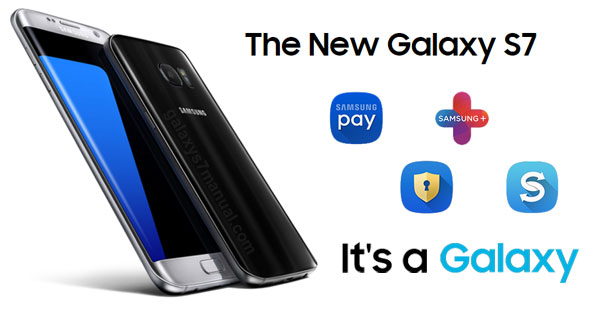 Samsung Galaxy S7 is Android smartphones manufactured and marketed by Samsung Electronics. The Galaxy S7 was officially unveiled on 21 February 2016 during a Samsung press conference at Mobile World Congress, with a European and North American release scheduled for 11 March 2016. The Samsung S7 is produced in a standard model, as well as an “Edge” variant whose screen is wrapped along the sides of the device.

Samsung Galaxy S7 is an evolution of the prior year’s model, restoring design traits from the Galaxy S5 such as IP certification for water and dust resistance, as well as expandable storage.

Samsung S7 devices are equipped with a Samsung Exynos 8890 system-on-chip and 4 GB of RAM. In the United States only, the S7 uses the quad-core Qualcomm Snapdragon 820, as unlike Exynos, it supports the CDMA networks which are still extensively used by some U.S. carriers.

NOTE: For open or reading this Galaxy S7 manual, your computer need Adobe Reader. You can get the Adobe Reader for free by going here http://get.adobe.com/reader/

Samsung S7  will go on pre-order on February 23rd and will ship on March 8 and go on sale in 60 countries on March 11. Samsung Galaxy S7 will be available in two colors: Black Onyx and Gold Platinum, and the Galaxy S7 edge will enjoy an addition option Silver Titanium.